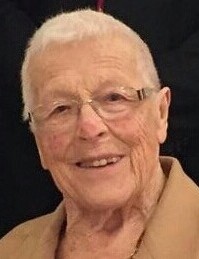 Age 94, of Hegewisch, passed away on February 9, 2018. Virginia was born on July 18, 1923 to the late Stanley and Julijanna Kielian.  She was the beloved wife of the late Thaddeus J. “Ted” Cap, Sr.,  loving mother of Ted (Linda), Donald, Jim (Rose) and Robert (Marcy), cherished grandmother to Steph, Jessica, Michelle and Michael, dearest sister of the late Bernice A. Kus, and loving aunt to many.

Virginia was a professional hairdresser for many years prior to starting her family. She continued to practice her cosmetology skills on a part-time basis through the years while being the greatest mom four sons could ever hope to have.  An exceptional cook, whether improvising or following a recipe, every dish was delicious, as it was prepared with skill, and the most important ingredient, love.  She also enjoyed gardening and tending to her yard.  Her flowers drew compliments from those passing by her home, and her tomato, cucumber and pepper plants always yielded bountiful harvests.

When there was a lack of services in the community for her disabled son Donald, Virginia and her late husband Ted joined with several other Southeast Side families in the early 1970’s to form South Chicago Parents and Friends. She later served as a board member for many years, and this non-profit organization has grown to include three program locations and two residential group homes, and currently serves hundreds of individuals with disabilities on a daily basis.

Virginia was also a member of the Hegewisch Community Committee for several years and was a staunch defender of the Hegewisch neighborhood. She was a devoted parishioner of St. Florian’s Catholic Church, and volunteered on behalf of the school and church for years.  When landfill operators tried to further encroach on the Hegewisch neighborhood and use wetlands for landfill expansion, she led a group to create Hegewisch Organized to Protect the Environment (H.O.P.E.).  The rallying cry of “no more dumps!” led the City of Chicago to pass the original landfill moratorium, ending the expansion of landfills and preserving thousands of acres of wetlands.

When a third Chicago airport was announced in 1990, its proposed location would have resulted in the destruction of numerous Southeast Side communities. Virginia formed Hegewisch Airport Opponents (HAO) with other residents to vigorously campaign against the airport for several years.  Ultimately, they succeed to block the airport and save over ten thousand homes and several communities from destruction.

In the late 1980’s, Hegewisch suffered with a Chicago Public Library branch located in a cramped storefront. Virginia joined with several other community residents to pressure the city to provide Hegewisch taxpayers with a state-of-the-art library.  Their efforts were successful, and a new library branch was constructed and opened in 1991.

She consistently placed the needs of others before her own, and as a result, she improved the quality of life for all in the Hegewisch Community. Her life is evidence of how the efforts of one can positively impact the lives of many.

To order memorial trees or send flowers to the family in memory of Virginia Cap (nee Kielian), please visit our flower store.