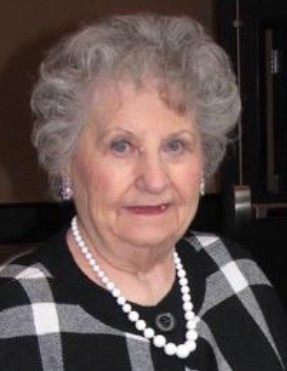 
Victoria met her future husband Rudolph Witos (from downstate IL) in Hegewisch while he was working in the Civilian Conservation Corps. She saw him passing on the road and whistled at him! There began their love story. They married June 3, 1941 and had three children—two daughters, Carolyn and Camille, and one son, Rudolph Witos, Jr.

Vicky, as she was known, was a devout and faithful Catholic and attended daily Mass with her husband Rudy. They participated in St. Columba Church activities and organizations, Vicky in the women’s Altar and Rosary Society and Rudy in the Knights of Columbus. She was also an employee of St. Columba Church, retiring at age 73. Her later years of physical disabilities only increased her devotion to God. Even through her suffering, her expressions of love and care for others was never failing. Her daily prayers included all family, friends, and the world in need. Vicky had a strong Polish heritage. Her parents emigrated in the early 1900s from Poland as did her husband’s parents.


She was a loving wife and mother, a devoted daughter who took care of her mother in their home until her passing, extremely hard working, and an excellent cook (she was known as “Dial-a-Chef” whenever there were cooking questions). Her hobbies included crocheting, crossword puzzles, sewing and watching the backyard birds and flowers. She had great affection for dogs and enjoyed the different personalities and pranks of the dogs she owned. Vicky loved to laugh and had a wonderful sense of humor!


Vicky was preceded in death by her parents, Stanislaw and Mary (Fruga) Strzelec, her husband Rudolph, Sr., her son Rudolph, Jr., her brother Walter, and two sisters, Agatha (Harriet) and Helen.

In lieu of flowers, donations may be made to:

To order memorial trees or send flowers to the family in memory of Victoria Witos (nee Strzelec), please visit our flower store.